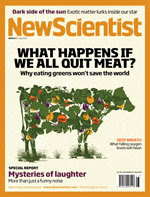 New Scientist magazine has published an interview with A4H President Brian Shiro titled "Astronaut for hire: Space tourism will help science".  The article touches upon how commercial spaceflight will revolutionize suborbital science and how A4H plans to be a part of it.  More details about A4H are available on our FAQ page.

As the world's #1 science and technology news service, New Scientist is the most widely circulated science publication with a global readership of nearly 900,000.  The article is available online or on newsstands this week in the 17 July 2010 issue (Issue 2769).  A PDF version of the article is also available for download from the A4H website.  A4H thanks New Scientist for taking an interest in our organization and suborbital science.

Posted by BrianShiro at 8:52 PM 0 comments 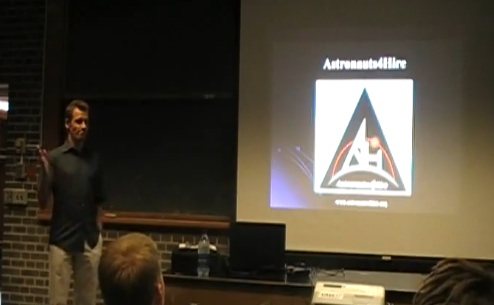 Erik was a top 30 candidate in the Canadian Space Agency's very selective 2008-2009 selection.  He spoke to WATC about his experiences in the astronaut selection process and introduced them to the technologies and myriad activities that constitute astronaut training such as simulators, emergency procedures, and virtual environment training.

WATC is a student group of motivated astronaut hopefuls at the University of Waterloo. In the same spirit as A4H, WATC brings together talented students and professionals to learn from each other and develop the knowledge, skills and abilities needed to be competitive as astronauts.  A4H wishes them well.

Posted by BrianShiro at 7:06 PM 0 comments

A4H co-founder Dr. Ryan Kobrick has been named the next Executive Director of Yuri's Night.  Effective July 1st, Ryan will be taking the position previously held by Yuri's Night co-founder Loretta Hidalgo Whitesides in leading the executive Global Team for Yuri's Night 2011. He will also be supervising the team’s Operations Committee, which manages the strategy, partnerships and internal affairs of Yuri’s Night.

Yuri's Night aspires to promote space and global cooperation by coordinating and hosting space-related celebrations all over the world every April 12. Yuri's Night 2011 will coincide with the 50th anniversary of human spaceflight (12 April 1961), as well as the 30th anniversary of the first Space Shuttle flight (12 April 1981).  April 12th is special to A4H as well, as it is the date when A4H officially came into existence, signaling the start of a new era of commercial human spaceflight. Inspiring the next generation is a critical component of both the A4H and Yuri's Night missions.

Posted by Astronauts4Hire at 8:33 PM 0 comments