Tampa, Florida – Have you ever wanted to be an astronaut? Do you have specialized scientific, engineering, or operational experience relevant to human spaceflight? Now is your chance to make your dreams come true! Astronauts4Hire is seeking candidates to expand its cadre of prospective commercial astronauts. Applications are due February 5, 2011 for full consideration in this selection cycle.

Flight members are the “astronauts for hire” who are eligible to receive training support from the organization and be hired for flight jobs, including parabolic trajectory microgravity research flights. Astronauts4Hire’s training program is designed to develop flight candidates for both suborbital flights, such as those that will soon be provided by Virgin Galactic and XCOR, and for orbital flights such as those envisioned by companies like SpaceX.

Individuals interested in becoming flight members can submit their application via the Astronauts4Hire website, http://www.Astronauts4Hire.org/p/join.html, before February 5, 2011. Finalists will be asked to provide an FAA Class 3 flight physical and verification of their academic credentials within 90 days of selection. Selections will be announced at the Next-Generation Suborbital Researchers Conference in Orlando, Florida by March 2, 2011.

Read more »
Posted by BrianShiro at 6:19 AM 0 comments

Astronauts4Hire's first job testing Vostok Space Beer in microgravity will have to wait until February. The parabolic trajectory flight was originally scheduled for November 19 but had been postponed to December 18 by the request of the flight provider. Unfortunately, the December flight was recalled due to poor weather. The next available opportunity will be in late February. 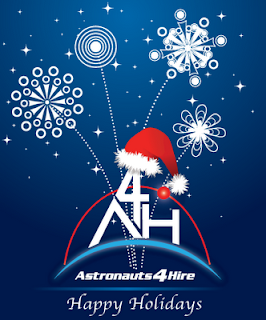 All preparations for the experiment have gone smoothly, and everything is in order for when we receive the green light to fly. After our original September announcement of the contract to test beer in microgravity, Astronauts4Hire has received tremendous worldwide media attention.  We thank everyone who has shown an interest in this work and ask you to wait a while longer for the historic flight to take place.

From all of us at Astronauts4Hire, Happy Holidays!  Great things are in store for commercial human spaceflight in the coming year.  Look for another announcement from us soon how you can join us!

Posted by BrianShiro at 7:52 PM 0 comments

Astronauts4Hire wishes to congratulate SpaceX on the successful launch of its Dragon spacecraft into low Earth orbit on a Falcon 9 rocket earlier today. The Dragon spent about 3 hours and 20 minutes orbiting the Earth twice before splashing down in the Pacific, where it was recovered. SpaceX joins a small club of only six space agencies that have successfully sent and recovered spacecraft from orbit. SpaceX founder and CEO/CTO Elon Musk said of the history-making accomplishment, "It's hard to be articulate when your mind is blown." He had previously estimated only a 60% success rate for the flight, which turned out being "100 percent successful." No astronauts were aboard the Dragon capsule for its maiden flight, but Musk remarked that if it had been crewed, "they would have had a very nice ride." Perhaps someday A4H crews will travel to orbit on the Dragon.

This is good news for the future of human spaceflight. Through its COTS program, NASA has contracted SpaceX to develop supply services to the International Space Station (ISS).  On its second and third test flights next year, Dragon will journey to the ISS for rendezvous testing maneuvers and a first docking with the station. In a statement issued today, NASA Administrator Charles Bolden said of the history-making mission: This is the first in a new generation of commercial launch systems that will help provide vital support to the ISS and may one day carry astronauts into orbit. This successful demonstration flight is an important milestone ... and shows how government and industry can leverage expertise and resources to foster a new and vibrant space economy. These new explorers are to spaceflight what Lindbergh was to commercial aviation.

In an interview posted earlier today on the Space Business Blog, Astronauts4Hire President and co-founder Brian Shiro revealed for the first time some aspects of the A4H business plan. Topics in the interview ranged from the upcoming space beer test flight to A4H's long term growth strategy and range of services.

We wish to thank Space Business Blog author Colin Doughan for his continued interest in A4H; he first wrote about us in an August 2010 post titled "The Astronaut Company".

Posted by BrianShiro at 9:32 PM 0 comments