The electrifying atmosphere of the Next-Generation Suborbital Researchers Conference (NSRC) filled us with great expectations for the coming year.  This year's suborbital science meeting had some big shoes to fill after featuring a keynote by Neil Armstrong last year, but it did not disappoint.  NASA deputy administrator Lori Garver surprised everyone by revealing that the Flight Opportunities Program is not excluding the possibility of funding human researchers on suborbital flights!  Virgin Galactic announced selling more tickets for flights on their suborbital vehicle than people who have gone to space.  XCOR Aerospace continued its strong support research and education missions, offering a 2-for-1 payload deal for NSRC participants. These were just a few of the exciting developments that emerged at the 2013 NSRC.

Astronauts for Hire (A4H) members presented on many subjects, ranging from how A4H empowers suborbital research to how to hire A4H members for suborbital science missions. A4H partners from SIRIUS Astronaut Training, The NASTAR Center, and Vital Space also presented at the conference on abstracts co-authored with A4H members. In total, A4H members and partners presented on over a dozen topics, which are listed in our May 28 press release. Flight Members Erik Seedhouse and Luis Zea are shown below presenting on behalf of A4H at the meeting: 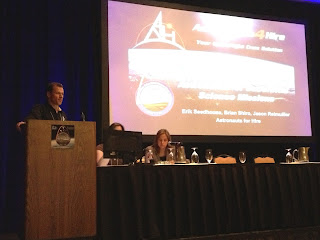 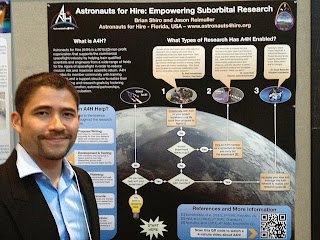 Read more »
Posted by Astronauts4Hire at 6:09 AM 0 comments

Broomfield, Colorado – Astronauts for Hire (A4H) proudly announces the selection of its fourth group of commercial scientist-astronaut candidates. The six new recruits were selected through a rigorous process from a pool of 85 highly qualified applicants from 14 countries who responded to the nonprofit organization’s March 2013 call for applications.

"The selection of the new class of A4H flight members marks our commitment to a future important role in the commercial spaceflight arena," said A4H Training Officer Dr. Erik Seedhouse. "The A4H selection committee was inspired by the outstanding talent we saw in the candidates who applied to become flight members, and we wish the new class well in their training. These flight members will continue to motivate and inspire those who want to reach for their dreams."

Read more »
Posted by Astronauts4Hire at 9:00 AM 0 comments