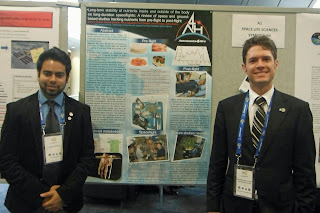 Astronauts for Hire (A4H) had a strong presence at the recent 65th International Astronautical Congress (IAC) and 13th Space Generation Congress (SpaceGen) meetings in Toronto, Canada. Six A4H members joined more than 3,200 other delegates from around the world at the event, whose theme was 'Our World Needs Space.'

Flight members Aaron Persad and Michael Gallagher presented a poster titled, “Long-term stability of nutrients inside and outside of the body on long-duration spaceflights: A review of space and ground-based studies tracking nutrients from pre-flight to post-flight” (IAC-14.A1.P.6). Their poster represented some of the latest work being carried out by the A4H Aeromedical Working Group. Aaron and Michael engaged in productive discussions with their audience during the poster session and received valuable feedback on the need for more ground-based controls on spaceflight nutrition studies. 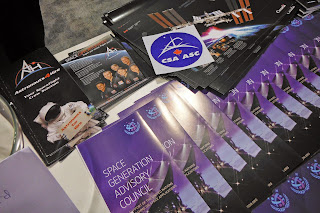 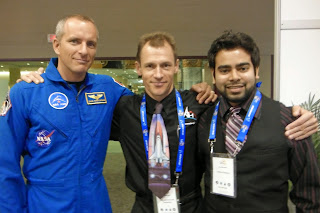 The IAC expo was a bustling place with many exhibitors representing all sectors of the space industry, including private spaceflight operators such as SpaceX, Boeing, and DreamChaser. A4H flight members Erik Seedhouse and Aaron Persad are pictured here on the expo floor with CSA astronaut David Saint-Jacques. In addition, Persad served on the local organizing committee for the Space Generation Congress, which featured NASA Administrator Charles Bolden as a keynote speaker. A4H's information table at the SpaceGen meeting generated much interest from those present. Persad gratefully acknowledges support from the Canadian Space Agency for these activities.

Posted by Astronauts4Hire at 10:38 PM 0 comments